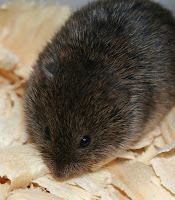 So yesterday, I started to clean the pool and found a little black vole sitting on the top step. When I approached, he dove into the water and headed for the deep end. His decision was not going to end well. I decided to intervene. I scooped him up with the net, set him down near the pool fence, and watched him head off to the woods.


I hope that field mouse knows he owes me. In his honor:

The Lion and the Mouse

Along comes a mouse and thinks he’s a hill.
Up the great body the little mouse goes,
Through mane, across ear, and down Lion’s nose.

But Lion wakes up and gives a great roar,
Catches poor Mouse in his long cruel claw.
“How dare you walk over your king and your lord!
For this only death shall be your reward.”

The little mouse shivers and shudders with fright,
Tries hard to think how to put things a-right.
“Forgive my mistake, mighty Lion, I pray,
And I promise to help you too some day.”

At this Lion laughs and shakes to and fro,
But he’s now in good humour and lets the mouse go.
Days come and days go, and some hunters pass by
Who set a great lion-trap cunning and sly.

Lion walks in, unaware of the threat,
And suddenly finds himself caught in a net.
Frustrated he roars with wrath and despair;
Little Mouse hears how he’s caught in a snare.

She remembers her promise and runs without pause
To the spot where the Lion so rages and roars.
Her sharp little teeth set to gnawing the rope,
Thread after thread, now the Lion feels hope.

Soon there’s a hole and the Lion is freed.
The Mouse has kept her promise indeed!
Paul King

Stay out of the deep end. Instead, head over to Anastasia's blog for the round-up:
http://picturebookday.wordpress.com/
Posted by Mur at 5:47 AM

Email ThisBlogThis!Share to TwitterShare to FacebookShare to Pinterest
Labels: The Lion and the Mouse

As Aesop said, One good turn, deserves another. (Or something like that.) That vole owes you big time, Mur.

When you save a man's life (or in this case, a vole's) he is your responsibilty forever, because you have changed his fate.

If anything happens to that vole, Mur, it's all on you.

What a great good deed, to save a life...

Would love to hear that little mole tell his family the tale of his close call! It's like something out of Beatrix Potter, only instead of Mr. McGregor waving a rake, it's you with a net (and a kinder heart!)

You did a very good deed indeed!