I received a politically-oriented email Mother's Day weekend regarding the 2012 elections in New Hampshire--don't worry, this is not going to be a politically-oriented post. The message reflected on the history of women in NH governance. It noted that in 2009, NH was "the first legislative body with a female majority in the country," and "New Hampshire is also the first and only state in the country to elect a woman as both a Governor and United States Senator--Jeanne Shaheen."

We had a Women of Wednesday post three years ago about the NH legislature. Wow, have things changed in three years time--and not for the better as far as women are concerned. Back then we ranked #2 of all the states, now, we're #22! At the time 37.7% of NH's legislature were women, now it's 24.8%. We had a majority of women in the state senate--13 out of 24--now we have 6 out of 24. NH is moving backwards. 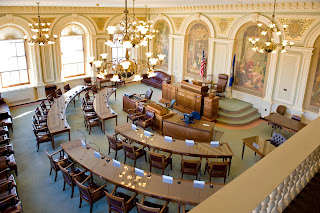 New Hampshire's Senate chamber in the Capitol Building in Concord is the oldest chamber still in use in the nation, having been in continuous use since 1819, the year the Statehouse opened. Photo and caption courtesy NH State Senate.

The elections in November 2012 are critical to restoring women to the NH legislature, and hopefully restoring some of the "people-oriented" services that have been drastically cut over the past two years.

Our present governor's term ends this year and Governor Lynch has decided not to run for a fifth term. I know there are women who have declared their intention to run. On the federal level, NH has two female senators, Jeanne Shaheen and Kelly Ayotte [note: surprisingly, three other states also are represented by two women in the Senate--California, Maine, and Washington]. As a small state, we have two congressmen, both of whom are men. Now just imagine...after November's elections, our new governor may be a woman, our two congressmen could be women, and our two senators already are women! I wonder where that would put us in comparison to the other 49 states? At the state level, we can only hope that women who are fed up with the way some of the men in the legislature have been acting, will run in opposition! Imagine...

If you can imagine it, it can be made to happen! Run for office, if you can. Vote in the primaries. Vote in the elections. It's your right--exercise it!