Women of Wednesday--The War on Women

Warning: this post is slightly political, but mostly I see it as a discussion of power--who has it, who doesn't--and our role in the "war."

Last year, at just about this time, I wrote a post where I mentioned the trivialization of the reality of war by the constant use of the phrase, "war on" (as in "war on marijuana," "war on Christmas," "war on marriage"). You can read it here.

The "war on women," however, although not a kill/be killed type of conflict, is one with far-reaching implications, and one that effects more than 50% of the U.S. population.

This is what the "war" is about--power, and how it can be kept from women. It is all about manipulation and bullying. It is an exercise for aging, white men in Congress--one last chance to be in control. (Yes, that is a broad brush to use, but bear with me.)

In a recent article by Kerry Kennedy, she wrote about the roles people take in any instance of bullying:

Will I be a perpetrator, a victim, a bystander or a human rights defender?

And each time she makes that decision on which role she will play, she is exercising a muscle. Like any muscle, the more she uses it, the stronger it becomes. And its strength defines who she is in her school, her family, her neighborhood, and most importantly, who she sees when she looks in the mirror.

The same choices exist in the "War on Women." 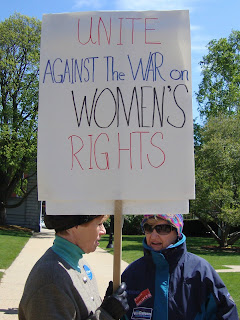 As a reader of this blog, I trust you may be sympathetic to our interests in seeing women, to paraphrase the army ad from several years ago, "be all that they can be." If that is so, then the only role you can take in the "war on women," is as a defender of human rights. Humans--and that includes women--denied rights can never be all that they can be. Become a defender of human rights, exercise your muscle.

Exercise that muscle by educating yourself, and then educating others. If you're a writer, you can follow in the footsteps of women such as Clementine Churchill. She knew the value of wit and humor in presenting an idea. Click here to read a letter she wrote 100 years ago in response to another letter from a anti-suffrage male.

Politicians, full of hot air, can be deflated, and they can be defeated at the polls. If you do nothing else in your role as defender of human rights, you can vote and make a difference. When you look in the mirror you'll be proud of what you see.

(Okay, now to address those other aging, white men in Congress. My favorite member of Congress is Bernie Sanders who said, "We are not going back." Others exist--support them!)

All you have to do is research and/or write about a Notable Woman's profile.

The courage these women showed is beyond remarkable. Their example guides my path.

Paying attention to the events and legislation that happens every day is a good place to start.

Once you start, you'll be exercising that muscle like a crazy-woman (Well, okay. Maybe not THAT crazy . . .)