Been to Your Local Historical Society Lately? 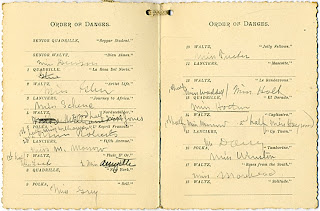 Last Thursday night we spent the evening at the Epping (NH) Historical Society where we spoke on several of our women from Women of Granite: 25 New Hampshire Women You Should Know.

One of the highlights of the evening for me was examining the walls and display cases in the Society's building. In one of the cases I saw dance cards from the early 20th century. I've seen PBS-type costumed dramas where the heroine writes her dance partners' names on a card, but I had never actually seen a dance card. The ones on display had the dances preprinted on them with a space for a partner's name. The names of many of the dances, such as the waltz, are familiar to 21st century people, even if they don't know how to do the dance themselves. Others, such as the schottische, leave my contemporaries scratching their heads! 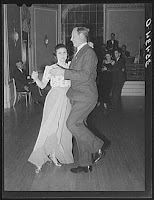 There's so much social history that has been forgotten over the years. Fortunately, a children's writer can come across a term such as schottische, or see an interesting item on a historical society wall such as a photo of a prize fighter, and it will open the flood gates. Off she will go running to find all she can on the subject. She'll read and read and read until her dreams fill with her research. At this point, she'll feel a certain familiarity with the time period and will then attempt to imagine how a young girl or boy would have fit into the it.

A preteen named Amelia sits next to her older sister, Lisabet. Lisabet flirts and writes young men's names on her dance card. She accidently drops the dance card and Amelia watches as Henry Post picks it up and and quickly writes his name next to the final waltz. Amelia acknowledges Henry's conspiratorial wink...

Okay, it's trite and predictable, but it's a start. Who knows, maybe our writer will find a way to tear your heart out, or to make you laugh until your stomach hurts! That's all part of the fun of being a writer.