Is it Possible to do a Pre-Review?

I haven't read the book yet but it's next on my list: A Whole New Mind: Why Right Brainers will Rule the Future by Daniel Pink. I just read Oprah's interview with Pink in her December 2008 magazine. The title of the book fascinated me because my husband used to say he was the only left-brained person supporting a family of right-brained people. He, the CPA and numbers guy, was right. I had managed to give him three children: a classics scholar and two theater nerds. Not a business person, engineer, or mathematician in the bunch. Evidently my right-brained, creative genes were stronger than his left-brained sequential, practical genes.

So it was with personal curiosity that I read Oprah's interview. Some of Pink's statements made me think about the impact of our work as writers for children. He said:
"My generation's parents told their children, 'Become an accountant, a lawyer, or an engineer; that will give you a solid foothold in the middle class.' But these jobs are now being sent overseas. So in order to make it today, you have to do work that's hard to outsource hard to automate...Financial firms are sending their back-office jobs overseas. But what do fine artists do? They create something new, unexpected, and delightful that changes the world...
And what, you ask, can a writer for children possibly do that can "change the world?" I'm glad you brought it up! Just think:

How many children have been soothed to sleep

because there exists
a Goodnight Moon? 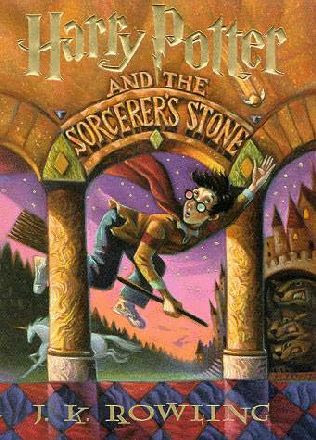 How many "non-readers" plowed their way through over 700 pages of text because there exists a Harry Potter?


How many families established a new holiday tradition because there exists a book called The Polar Express?
How many jobs were created because of these stories? I can think of dozens! All the merchandise that accompanies these books needed people to make them: posters, stuffed animals, action figures, games, CDs, and, of course, magic bells.
Screenwriters got jobs. Actors got jobs. Voice-over artists got jobs. Northern communities host special train rides that take children on a Polar Express adventure every winter.
Somebody designed Halloween costumes. Somebody else started a web site. Somebody figured out a way to market the books in special sets.
All this because a few right-brained, creative people wrote some books for children.
Imagine!
Posted by Mur at 10:18 AM

I understand what you're saying, but if a writer or illustrator is going to make a living, she quite often must take assignments. These less-than-creative writing/illustrating jobs are also being shipped overseas. One needs to eat to support the brain's creative work. If only everyone thought like you (and I) do, we could support ourselves and our creativity at the same time.