That Amazing Woman and Her Flying Machine 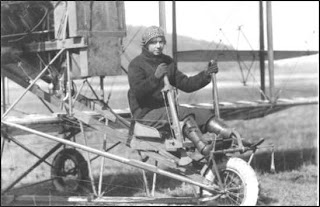 Law was one of the daredevil girls -- women who seemed to have no fear of physical risks. As children, she and her brother, Rodman -- who later became known as "The Human Fly" for some of his feats, were keen adventure seekers. Mrs. Law often told people she felt like a hen who'd hatched two ducks.

In her early twenties, Ruth was bitten by the flying bug. Not surprisingly, she was denied flying lessons by the best and most famous. Both Glenn Curtiss and Orville Wright felt women didn't belong flying aeroplanes. That didn't stop Wright from selling Law her first one -- a machine made of little more than wood and canvas, strung together with wire. Law sat in front of the engine -- a whopping 100 hp motor -- about the same power as today's Harleys.

After some time spent flying exhibitions and doing aerial aerobatics, Ruth decided she would do something for herself -- she would break a flying record. In early November of 1916, the famous aviator, Victor Carlstrom, set a US record for longest flight -- a flight from Chicago to New York State -- a total of 420 miles. He did it in a little more than eight hours.

Only a few weeks after Carlstrom's record-breaking flight, Law would attempt to go farther. Of course, she wouldn't have the advantage Carlstrom had. Unlike Carlstrom's bigger, closed cockpit airplane, Law was still flying her little Curtiss Pusher. Glenn Curtiss couldn't sell her a bigger plane -- World War I was raging in Europe. Besides that, Curtiss didn't believe she could handle the bigger plane.

Ruth decided to go with the plane she had -- modified of course, with an added tank to hold an extra fifty-six gallons of fuel. She had a windshield outfitted to block the frigid air she'd encounter. A map holder she designed, would be strapped to her leg to leave both hands free to steady the controls. Food would just add to the airplane's weight, and besides that, would have frozen anyway. She wouldn't bring it. Law trained for the event by exercising vigorously. She slept for several nights in a tent on the roof of a Chicago hotel to acclimate herself to the cold temperatures.

On the morning of her departure, Ruth's plane wouldn't start. The weather was just too cold. Finally, an hour later than she planned, Ruth Law took off in her little plane. It barely made it over the trees at the end of the grassy landing strip. One of the plane's mechanics cried as she went, believing the young woman would never make it.

Ninety two years ago today, Ruth Law did make it -- landing in the record books. She flew 590 miles -- the longest non-stop cross country flight by an American and and the longest world flight by a woman. Her longest flight before this had been only twenty-five miles.

Today, I salute Ruth Law and her amazing feat.