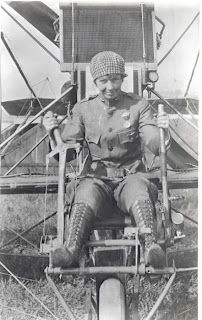 I've been thinking about Ruth a lot lately, because I've been working on her profile. It will appear in The Write Sisters' upcoming title Women of the Golden State: 25 California Women You Should Know. Last week I wrote about Ruth Law's historic, record-breaking flight.

After Ruth broke the record for flying farther than any American man or woman (and second in the world only to a British pilot), she became quite the celebrity. She was asked to fly over the Statue of Liberty as it was lighted for the first time. This was December 2, 1916.

As thousands watched, Ruth did a loop to loop over the statue as the flood lights came on. Her little plane sported magnesium flares on its wingtips. A heavy load of electric lights, strung under her airplane, spelled out LIBERTY. Thousands of people cheered her from the shore as she zoomed through a shower of sparks. They continued their cheering as a line of dignitaries made their way to the Waldorf-Astoria where Ruth sat at the dais with the honored guests -- including president and Mrs. Woodrow Wilson.

Despite her skills as a pilot, Ruth was not allowed to fly during World War I. She'd been flying air missions for Liberty Bonds and The Red Cross Ambulance Service -- dropping paper 'bombs' urging people to buy bonds or donate to the service.

Ruth wanted to serve. She even wrote a provocative article for the Chicago Herald -- "Go Get the Kaiser." The piece told what she would do if she ha a chance to bomb Germany.

In December of 1917, a democratic congressman from New York introduced a bill to congress. It asked that women be allowed to serve in the military. He felt women, especially pilots -- especially Ruth Law -- could serve the US in meaningful ways.

Ruth was eager to serve. She lobbied congressmen wearing the Non Commissioned officer's uniform she wore during her work for bonds and the ambulance service. She even flew upside down over the White House, landing on Pennsylvania Avenue. Ruth felt that women were probably not ready to fly in combat, but could provide "plain, unspectacular flying."

Ruth had demonstrated her awesome flying skills -- she had set two altitude records for women, and could loop, spiral, and dive with her little plane. Despite this, she would not change the congressmen's minds. Women would not fly in the 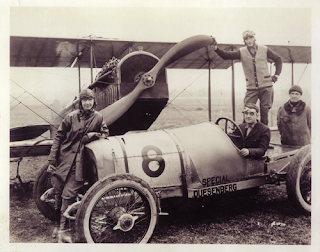 After the war, flying lost its charm for most Americans. Many considered airplanes merely weapons of war. The fliers who would always be fliers kept the public interest by flying exhibitions that included more and more dangerous stunt flying. By 1921, Ruth had her own show -- Ruth Law's Flying Circus. Ruth and her two male pilots kept the crowds pleased by stunting on a rope ladder that hung from the plane -- dropping into a race car. They did some wing-walking, too. Ruth was famous for standing on the top of her plane as it did the loop to loop. The harness kept her upright for the first three loops, bu 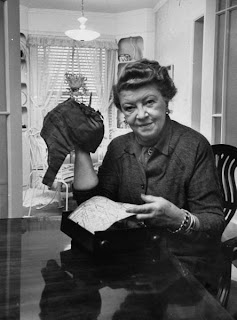 t after that, the pressure of the stunt laid her flat.

Eventually, Ruth's husband -- who'd been her biggest supporter and also her manager -- couldn't take it any more. He released the news to the media. Ruth Law was retiring from flying. Ruth read it in the newspaper. She obliged her patient husband. The two moved to Caifornia where Ruth lived until her death in 1970.
Posted by I'm Jet . . . at 9:23 PM

Thanks for the info she did a lot of amazing things. She is the topic of my public specking assignment.Very interesting woman and would love to learn more about her.