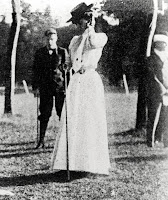 Continuing with the Olympic theme, I thought about the numerous Olympians we have profiled in the America’s Notable Women series. And I wondered who the first woman was to represent the United States in the Olympic games. Turns out to be an unusual story – not one of years of training, overcoming discrimination, or even athletic passion. It is, rather, very much a tale of its time.

The first modern Olympics, Athens 1896, did not include any women. Pierre de Coubertin, the French historian who lobbied for and organized the games, reasoned that since women did not participate (nor even attend) the Ancient Olympics, it would be appropriate to exclude women from the Modern Games as well. (Actually, there are records of women winners in the Ancient Games: like Ann Romney, they were the owners of horses competing in the equestrian events.)

The 1900 Olympics were held in Paris as part of the general celebrations of the 1900 World’s Fair. The games, like the Fair, ran from May to October, and, as an adjunct to the Fair, were more like a collection of athletic exhibitions than a unified event. Several of these exhibitions were of women’s sports: Lawn tennis, golf and croquet (and at least one woman sailed in a mixed yacht crew for Switzerland).

Margaret Abbott was a Chicago socialite living in Paris with her mother for a year of study of art. In October, both mother and daughter entered a nine-hole golf tournament. Golf had become the rage among high society people in Chicago in the 1890s when Charles MacDonald sent back to Scotland for a few sets of clubs and introduced the game to the United States in Wheaton, Illinois. The other competitors in the women’s tournament were also socialites, both American and French: golf was considered an appropriate game for ladies, as it provided for fresh air and exercise without requiring either revealing clothing or unbecoming perspiration.

Margaret won the 1900 Paris tournament with a score of 47, and received an antique bowl (with gold decoration) as her prize. The second and third place winners were also Americans. (Mrs. Abbott came in ninth.) It is very likely that the participants in the tournament did not realize the match was considered part of the Olympic Games; there is evidence that even some of the track-and-field participants considered their events part of the Centennial Exhibition but not “Olympic.” Margaret went on to win another tournament in France that year before returning to the United States, where she married the humorist writer Finley Peter Dunne in New York City. The Dunnes remained in New York and Margaret (and her four children) continued to play golf, albeit not competitively.

In the early 1970s, as the Women’s Movement and Title IX brought attention to women’s participation in sports, Paula Welch at the University of Florida began to research the question of female Olympians, and discovered Margaret’s story. In 1996, at the centennial celebration of the Games in Atlanta, Margaret was included in the program feature on the athletes of the 1900 Games.

This year, for the first time (and only because of pressure from the IOC), every country participating in the Olympic Games sent at least one woman athlete.

Golf has never again been included in the Olympic Games, so Margaret Abbott remains the only winner of a gold medal in women’s golf.
Posted by Sally at 7:24 AM

"...so Margaret Abbott remains the only winner of a gold medal in women’s golf."