I hated that quote when I was a myopic teenager.  Now, as a myopic member of AARP, I appreciate the joke much more.  The line is one of hundreds of Dorothy Parker’s witticisms. 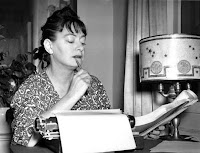 Parker was born 119 years ago today.  Her birth name was Rothschild.  Her professional name came from her first husband, Edwin Parker.

Dorothy began working in the New York magazine world in 1914, first at Vogue and then Vanity Fair.  There she became a well-known theater critic.  She could be tough:

“She runs the gamut of emotions from A to B.” (Speaking of Katherine Hepburn).

In 1919, Dorothy and several other writers began to meet for lunch every day at New York City’s Algonquin Hotel. There was no set purpose to the lunches and it’s said the first one occurred because of a practical joke. The group had such a wonderful time that they decided to meet daily. They jokingly called themselves “The Board” and, later, “The Vicious Circle.”  The lasting name for the group, “The Algonquin Round Table” came about after a cartoonist lampooned them in a caricature. The group became well-known when they began to quote each other’s quips in their newspaper and magazine columns.

Dorothy’s writing included plays, short stories, and movie scripts.  In 1928 she divorced Edwin Parker. She lived for some time in Hollywood. The years following included a rough patch of affairs, alcoholism, at least one abortion, depression, and attempted suicide.

“I'd rather have a bottle in front of me, than a frontal lobotomy.”

During the same period, however, Parker became an activist.  She protested the trial and executions of Sacco and Vanzetti. In the 1940s she became greatly involved in the cause of Civil Rights and helped to start the Hollywood Anti-Nazi League. She was head of the Spanish Children’s Relief committee. By the 1950s, she’d been blacklisted as a Communist. 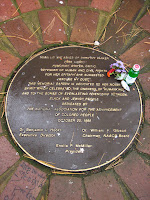 Her second husband, Alan Campbell, died in 1963 and Dorothy returned to New York.  She died in 1967 and left her estate to the Dr. Martin Luther King, Jr. Foundation.  After Dr. King’s assassination, the estate passed to the NAACP.  The organization prepared a memorial garden for her remains and a plaque that reads: “Here lie the ashes of Dorothy Parker…humorist, writer, critic.  Defender of human and civil rights.  For her epitaph she suggested, ‘Excuse my dust.”  This memorial garden is dedicated to her noble spirit which celebrated the oneness of humankind and to the bonds of everlasting friendship between black and Jewish people…”

“I don't care what is written about me so long as it isn't true.”
Dorothy Parker
Posted by Mur at 5:00 AM

Such a legendary figure! I wonder which of today's literati they'll be writing about in 119 years.

I love the Katherine Hepburn quote.

I'm reading Caitlin Moran's "How to Be a Woman" right now and she said, "Parker is the Eve of female humor. Robert Johnson invented the blues, at midnight, at a crossroads, after selling his soul to the devil. Dorothy Parker invented amusing women, at 2 p.m., in New York's best cocktail bar, after tipping a busboy 50 cents for a martini. It's hard not to draw conclusions as to which is the brighter sex."

I'll drink to that, Andy!