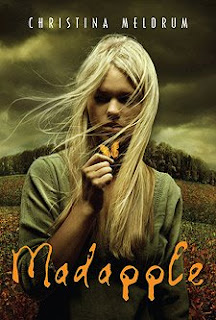 Madapple is the story of two births and three murders, and at the center of them all is Aslaugh, a teenage girl who lives with her mother in Hartswell, Maine. I don’t know if Hartswell is a fictitious town or not but, real or fictitious, I’m certain it lies in close proximity to Stephen King’s town of Castle Rock.

Aslaugh lives with her mother who is a little . . . well . . . strange. They have almost no contact with the outside world. They forage for plants and greens to eat and cure themselves of their ills. Aslaugh is educated at home and taught science and languages and everything you can think of except religion. Aslaugh’s mother believes religion is merely superstition, and yet she hints to Aslaugh that she was born of a virgin birth.

One night, their next door neighbor sees Aslaugh burying her mother in the back yard. The police are called, Aslaugh is arrested, but eventually acquitted. She goes to the nearby town of Bethan to live with her aunt and two cousins. Her aunt is the head of a charismatic church. She has a daughter a few years older than Aslaugh, and a son the same age. The daughter has been curious about Aslaugh all her life, and sets out to prove she was born of a virgin birth. The son is less fanatical and he and Aslaugh form a close bond.

When Aslaugh turns up pregnant, we are left wondering if she has had sex with her cousin, been visited by God, or ravaged by the devil. It might even have been that butterfly she ate. Meldrum made me believe all these things were possible. She weaves science, religion, myth and folklore together throughout the story, raising question after question that keeps you turning the pages.

Eventually, there are more deaths for which Aslaugh is blamed, but Meldrum sets up the story perfectly so that you never know the truth until almost the very last page.

The story is told in alternating chapters of story and courtroom scenes, and the courtroom scenes are where we get many of the answers to the questions raised. But Meldrum never gives us all the answers, not until the very end. It was a page turner all the way.

And the icing on the cake is that it is well written. There is no slogging through sloppy writing here. The jacket copy says this is Meldrum’s first novel. I’m hoping she’ll write a lot more.

Sounds good! I'll have to order a copy for the library!