"But Mom, everybody's doing it."

"And if everybody jumped off a roof, would you jump off, too?"

We've all heard that before. Some of us may have even said it. So, what does Mom's advice have to do with narrative drag?

Open any novel, and somewhere inside, you'll probably find narrative drag. All writers do it. The best writers just do it less often. And we all do it because we've seen it done many times and think we need to do it, too. 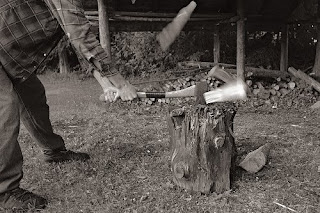 Photo by troycochrane
Here's an example--

Jack swung the ax. It missed the wood and sunk into his boot, the cold steel biting into his toe. He screamed.

Mom rushed outside. She was wearing a housedress and the Garfield slippers he had bought her for Christmas. The housedress was white with purple flowers, only now they were so faded, they were mostly pink. Her brown hair was cut short and curled to her neck just below her ears. She had worn it long until Dad died, because he liked it that way, but the day after his funeral, she had gone to the beauty parlor and had it all cut off.

Now, even if you've never heard of narrative drag, I'm betting you can pick it out in that example. It's when we stop our story--when we prevent our characters from speaking, acting, or thinking--so we can interject and explain.

Did you care what color Mom's hair is. Or its length? Or why she cut it? Were you fascinated by the tidbit about her slippers? Are you dying to know where she bought her housedress? Of course not. You want to know if Jack cut his toe off.

Imagine if they did that in the movies. In the middle of a climatic scene the screen fades to black and the director comes on to tell us about the motivation behind a character's actions. and after he's bored us to tears and the tension of the scene has withered away to nothing, he says, "And now, back to the movie." The conclusion of that scene no longer has an impact--certainly not the impact it would have had if it hadn't been interrupted. Narrative drag does the same thing in your story.

So, how do you avoid narrative drag? How do you introduce those Garfield slippers that will be important later, or get across to the reader what Mom looks like?

Include them in the action, and attach verbs to them.

"Jack!" Mom cried. She raced across the yard, her Garfield slippers slapping the mud. She grabbed the ax handle and pulled it from Jack's boot. Blood dripped from the blade onto her faded housedress, turning a pink petal purple again.

And as the scene continues, you mention her hair in the same way and whatever else you need the reader to know. The verbs keep the story alive, and they keep the reader focused on the action. Things are happening, the scene is moving, and you've still relayed the same information as the first example. The difference is that the information has become part of the story, rather than an aside. The characters haven't stopped what they were doing so the author can explain. They are still acting, thinking, and speaking, and the author is nowhere around.

That's all there is to it. So, if you should find yourself sticking your nose in a story where it doesn't belong and explaining things to your reader, don't tell yourself it's just a few lines and everyone else is doing it. Stop it right away and cut it out immediately. (Literally.) You'll end up with a stronger story, and you'll have made your mother proud.

Wait! So is Jack's toe cut clean off? Is Mom going to be able to remove that blood stain?

Your Drag post was Divine, Barbara. (As in drag queen extraordinaire Divine, may s/he rest in peace.)