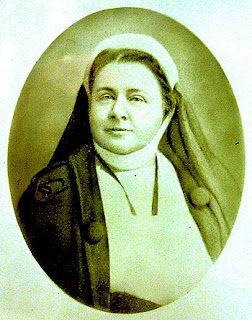 Sister Beatrice was neither a nun nor a woman named Beatrice, but she sure could get things done. Born into poverty in 1868, Caroline Gott spent her first three years in Ohio before being adopted by the Clarks of Rochester, New York. Her singing talent was evident at an early age, and by 1890 Caroline was singing professionally.

Around 1898, Caroline married Dr. James Bartlett, a dentist some 30-years her senior. They bought a summer home in Warner, New Hampshire, and Caroline established Sunny Hill, a music school. Caroline researched voice production and even exchanged letters with Thomas Edison about voice. She developed her own way to teach singing called the natural voice method. She established such a name for herself that Lillian Nordica, the premier diva of the day, started training with Caroline in 1907. Just how much of a celebrity was Nordica? Celebrity enough to be featured in Coca-Cola advertising, that's how much.

Caroline's husband died in 1909, and Caroline did what all good widows do. She made a beeline for New York City and started another singing school. She and Lillian planned on working together, and set up a recital tour of Europe. Caroline, an eccentric who could have given P.T. Barnum lessons in self-promotion, arrived in London in 1914, but the tour was doomed before it even started. Lillian, who had just wrapped up a recital tour of Australia, never made it to London. She was shipwrecked on a coral reef à la Gilligan's Island. (Quite possibly Lillian was the inspiration for the Ginger character.) Although she was rescued, she was too weak to continue the journey and eventually died on the island of Java. Even if Lillian had found her way to London, the outbreak of World War I would have ended the tour in short order.

Not long after Lillian's death, Caroline was drinking tea with a friend when she had a vision of "Christ in the cowl." A few months later she started seeing fields of purple and eventually a purple cloak. She saw this cloak in such detail that she had a London seamstress create one for her based on sketches she had done. In an effort to determine what these visions meant, she met with an archdeacon. He told her she was being called to humanitarian work, but that ultimately she would be persecuted.

By this time, London was filled with Belgium refugees escaping the war, homeless and hungry. Moved by what she witnessed, Caroline became the Bob Geldof of her day. She walked around London asking people to help the refugees. She collected and distributed clothing, food and money. She was so good at her self-appointed relief work, that a doctor who saw what she was doing asked her to go to France to open a hospital for wounded soldiers.

Caroline went to France and saw the suffering firsthand. She traveled back and forth across the English Channel dozens of times, raising money and supplies which she brought back to France with her. She took her eccentricities to new heights when she started wearing a self-designed uniform to make herself more recognizable when traveling in a war zone. The uniform was fashioned around the purple cloak, and resembled a nun's habit. For reasons unknown, she started going by the name Sister Beatrice. Within two months, she had a hospital up and running in Yvetot and was appointed hospital director.

Caroline looked for money and resources anywhere she could find them, and her abilities as a performer served her well. She once spoke to an audience of 140,000 ship builders in Newcastle, England in her quest for funding. Attired in what had become her trademark purple cloak, Caroline raised money, supplies, and more than a few eyebrows.

Caroline was acquiring enemies along the way. For all of her media savvy, she was quite naive about the effect her strong, blunt personality had on people. Her successes as an independent relief agent were met with jealousy by officially sanctioned relief organizations. Caroline was already treading a fine line as a woman alone in a foreign country. Toss that purple cape and her unique personality into the mix and you've got a recipe for suspicion and ridicule. Rumors started swirling that she was a war profiteer and a German spy.

Caroline was accused of mishandling the monies raised for the hospital at Yvetot. In October 1915 she was dismissed as its director. On December 4, 1915 the New York Times front page headline read "'Sister Beatrice' Accused -- Mrs. Caroline Bartlett Called a German Spy."

Despite these blows, Caroline continued her relief work. Throughout 1918 she raised hundreds of thousands of dollars for the Serbian's Widows and Orphans fund. Caroline's relief work ended with the war in 1919. With her reputation in tatters, it was nearly impossible for her to find paying work.

Caroline returned to Warner, New Hampshire in 1929. In poor health and with few friends, she spent her last years trying to clear her name. She died in Warner on February 16, 1938. The woman who single-handedly raised hundreds of thousands of dollars and was responsible for saving countless lives bowed out of this world as poor as she was upon her debut. She died with only $59.60 cash in her estate.

Posted by Andrea Murphy at 7:11 PM

Fairwell, all! I'm off to New York to start a singing school.

Great pic of her. I'm interested in the ww1 med history. Sis Beatrice was a member of the Pearson Committee created to develop the privately funded Allies Hospital in Yvetot France.
Comment?

You can find my research bibliography at the Apprentice Shop Books site, Gil:
Chapter 10: Caroline Gardner Clark Bartlett: Nurse or Spy? I hope you find it helpful. Sister Beatrice/Caroline was such a fascinating person. Thanks for your interest!