Some of the women we are profiling for our "America's Notable Women" series were incredibly poor, a condition that forced them to rely on their talents to survive. Others weren't necessarily poor, but used their talents to overcome come great adversity in the court of public opinion. And then, there were the wealthy women. Women who had enough "green" to let them live comfortably, but who weren't content simply to live a life of leisure. They employed their talents, and their money, to good use.

One such woman was sculptor, Katherine Lane Weems (1899-1989). Katherine was born into money--her father was a Boston financier and president of the Museum of Fine Arts in Boston. One look at Kay's baby picture and you can see the wealth that her family possessed--the baby is dripping lace!

Mr. Sargent was charming and most kind to me. He explained the work, showed me how he was doing it, and even asked my opinion. It was the first time anyone had treated me like and adult, and I was captivated."

As it turns out, Kay was quite talented as an artist, and her wealth enabled her to study and work without the worries of making a living. She understood, though, that her situation was privileged, and wrote,

I decided not to seek commissions; I did not need the money and did not want to deprive another artist, but if I were offered a project that strongly appealed to me I would accept it and give it my best.

Kay was offered a grand project, the Biological Laboratories building, at Harvard University. From 1930-1937 she created a frieze, bronze door panels, and large bronze sculptures of two rhinoceroses, affectionately known as Bessie and Victoria. You can see the work on this online tour.

Later, she sculpted the dolphins that now stand outside New England Aquarium. She had found that dolphins were endangered due to tuna fishing. This bothered her greatly. She decided to create a sculpture to celebrate dolphins, and to bring to the public an awareness of these creatures and their plight. Kay wrote,

I was in my seventy-fifth year when I embarked on this ambitious but difficult project. I knew it would take time. I was eager to do it, and even though I was in good health there were moments when I wondered if I would have the strength to finish it.

Finish it she did--it took her five years from the time of her first sketches until the sculpture was unveiled in 1979. She gave her work as a gift to the Aquarium--and to the world. 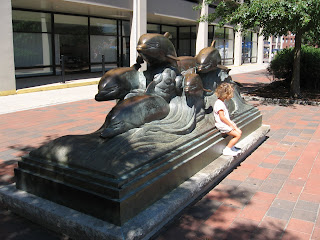 Kay Weems was rich in fortune, talent, and concern for all creatures, and, we continue to enjoy her legacy.

I had no idea that the rhinos and the dolphins were the same artist's work. And how inspiring that she didn't say "I'm too old for that" when the inspiration to do the dolphin sculpture came to her.

I love our ladies!