Lynn Jennings: In It For the Distance 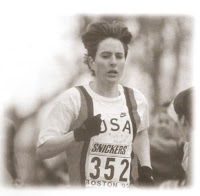 When it’s time to choose women to profile for the Notable Women series the problem never lies in finding enough interesting topics. The problem is deciding where to put them. Olympic distance running champion Lynn Jennings is a case in point.

Lynn was born in New Jersey, lived in New Hampshire, and retired to Oregon. In which state book should she be featured? We went with New Hampshire because most of her athletic accomplishments occurred while she was living in Newmarket, NH.
Stories about athletes are always inspiring because we know that in order to reach their goals they generally
a) worked very long and hard or
b) overcame some challenge or
c) both.

Lynn did work very hard but that is not why I found her fascinating. I was enthralled with the story of a woman who aimed for a goal that did not exist.

Even as a young child Lynn loved to run. When she was around six she was already asking her dad to time her as she ran. In high school, she ran with the boys’ track team because her high school did not have a girls’ team. Lynn loved speed but she especially loved the challenge of distance.

During her early teens, her parents took her to see some Olympic track competitions. The distance runs excited her imagination. This was her goal: to become a champion women’s distance runner. The only problem was, there were no distance competitions for women at the time. Lynn believed that the day would come when women would have their own distance trials in the international games. She trained accordingly.

She made mistakes, of course, as everyone does in life. She entered her first Boston Marathon at age 17. It was to be an unofficial time because the rule was that competitors had to be at least 18 to qualify. Lynn soon learned why the race was held specifically for adult runners. If her time had qualified, she’d have come in third. Instead, the grueling course damaged her knee and she needed surgery.

After college, Lynn moved to NH and trained herself. She eventually attracted the attention of a sponsor and a coach. In 1992, she reached her goal: she won a bronze medal in the 10,000 meter race at the Barcelona Olympics.

When the running world added distance racing for women and Lynn was ready.
Posted by Mur at 1:00 AM