Last month I mentioned the phenomenon of Research Rapture –the delightful but dangerous risk of getting constantly and repeatedly sidetracked in following, intriguing bits of information, or constantly searching for one more elusive fact. Today I’d like to remind us of a related research risk, which lies perhaps at the other end of the spectrum-research laxity.


Laxity, or a lack of vigilance, is a particular risk if you are doing research primarily on the web. As we all remember from the old New Yorker cartoon “On the internet, no one knows yo 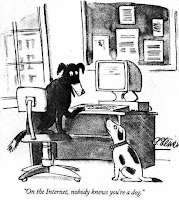 u’re a dog.” Anyone can put up a website, fill it with stuff, and claim it’s all true. The poster doesn’t have to cite sources, be vetted by editors or fact-checkers, or accept responsibility. The author may be a brilliant scholar who’s an expert In your topic, or a total crank with an axe to grind. As a writer, it’s your responsibility to do good, careful research, so that you don’t perpetuate myths or misstatements.

On the internet, it can be helpful to rely on sites that are maintained by reputable institutions: universities, state departments of historic resources, the federal government, etc. Even there, however, we need to be cautious. (See cautionary tale, below!) Be alert for inconsistencies and double-check when possible.


Print materials are generally considered more reliable, but caution is still a good idea. Some editors are better than others, as are some authors. And even if everyone involved in a project was being conscientious, later research may change “facts” or their presentation or interpretation. Even a contemporary newspaper report may have been subject to later correction.

A good rule of thumb is not to cite a fact unless you find it in three independent sources. This is tricky with internet research, as misinformation gets repeated endlessly. (Genealogy websites are notorious for this, although they are fantastic as sources of otherwise impossible to find information!)


Keep track of where you find things! This is important not only for fact-checking (you may be asked to provide your sources to your editor) but also for tracking down the item that you noticed in passing but didn’t use, and then decide weeks later that it’s just the bit you need! You can easily save webpages on your hard drive for later reference (somewhere on your internet toolbar there is a “page” option, click it and select “save as.” If you didn’t do that, you can try to get back to a page using the “search” feature on your browser history. If you’re willing to add something to your computer, the Google Desktop feature caches and indexes every page (internet, word processor, email, whatever) you open on your hard drive, and allows you to find it later via their familiar search interface. Warning – I use Google Desktop and find it very valuable, but it does slow down your system, and presumably soaks up hard drive space.

emopads) in the book as I read, sometimes annotating them with a key word if I know I’m going to want a particular item. (Warning-I have been told that these wonderful stickies leave a minute but real amount of adhesive on the page. Please do not use them on ancient or valuable books!)

If I’m using a print resource in a library or archive, I will photocopy the page of interest (if allowed) and then write the publication data on the back. Failing all of the above, of course, good-old-fashioned note taking will suffice!

After three weeks of research of a particular Notable Woman I sat down to write my profile. There was a quote in her biography that I wanted to use, but when I went back to it I discovered that the author had not footnoted it (although the book does have copious footnotes). This was puzzling. Knowing that my editor’s first comment on my draft would be “this is a real quote, right?” I went in search of the biographer’s source. I checked her bibliography. I googled specific lines from the paragraph in question. (Don’t miss Google Books and Google Scholar, both in the “more” drop-down menu at the top of the search page.) Finally, after a couple of days of intense work, I found the quote, in a book published in 1948 and available in full from the Internet Archive.

The biographer had misattributed the quote. Now I wasn’t actually shocked by this because over the course of my searching I had found several discussions of other books by this author in which she had apparently massaged the facts to suit her story or support her interpretation. One later scholar observed, in an effort to be kind, that the author was “a professor of English, not History.”

The result of this discovery was, of course, that not only could I not use the quote as I had wanted, but I became suspicious of everything else the biography said about my Woman. And since it’s the only biography of her, that meant extensive double-checking of other sources. In the process of which I found some other inaccuracies in other sources.

For example – one printed source (a coloring book) reported that at 18 my Woman had been travelling with her mother in Europe with the mother died. Another source – a website published and maintained by the State Historical Archives, reported that the mother had died 7 years later, attended by my Woman’s brother, who had gone to Europe with his mother for medical treatment. My immediate suspicion, based on an assumption about the validity of the Archive site, was that the coloring book author had been misinformed or had misinterpreted or misstated the facts. Fortunately, I had the sense to dig a bit further (since I now had two sources in direct conflict, the rule-of-three said to keep looking). Eventually (thanks Newspaper Archive) I found the mother’s death notice. She did die in Europe, attended by both children, shortly after the daughter’s graduation from school in France (the earlier date). Whether she had gone to Europe for a trip or for medical treatment I was not able to determine. I did learn, however, from another newspaper clip, that the two young people arrived back in the States with their mother’s body 7 months later! It hadn’t occurred to me that in a time before air travel, such a journey would be so prolonged.

I will probably send a note to the webmaster of the State History website with a pdf of the death notice and suggest that a correction would be in order. There’s nothing to be done about the biography, as far as I can see, except to annotate MY bibliography to warn future researchers who might happen upon it.

Can I be certain that I will not inadvertently pass on some incorrect “fact” as I write? Of course not. But I can make every reasonable effort to avoid doing so. Sometimes rabbit-hole research isn’t rapture. Sometimes, it’s just due diligence.
Posted by Sally at 10:24 AM

Fabulous, Sally! Your piece reminds me of the recent article about the Write Sisters. The author put down some incorrect information and when people start writing biographies of the Write Sisters and their work, the info will be repeated. :)

The term "research rapture" originated with Louis Jones, who was Oakley Hall's student in the nineties.