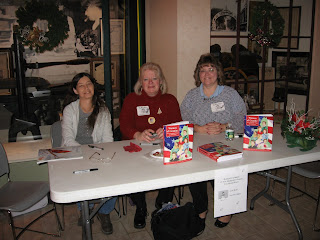 Some of The Write Sisters attended the Manchester (NH) Historical Society's open house last Friday. Their bookstore now carries Women of Granite, so we were happy to attend to promote and sign our book.

The 4 scheduled hours were much too long, but, we managed to keep ourselves entertained by signing books and just generally catching up with each other.

There were other perks such as two super platters of cheese and crudites, and cheese and fresh fruit!

Janet became reacquainted with a woman who portrays aviatrix, Ruth Law. Ruth Law was the subject of two of Janet's recent posts.

I bought a present for myself--yes, it's all about me--in the Historical Society's gift shop. It's a reproduction of a photo that I had first seen many years ago, an image that has stuck with me (you can see it below). This photo is, for me, the epitome of immigrant pride. I like to think that those who participated in the making of this oversized flag wove or sewed a little bit of themselves into it. 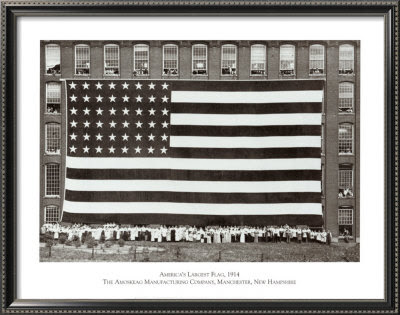 All in all, it wasn't a bad way to spend an evening.

I love that picture, too, Diane!