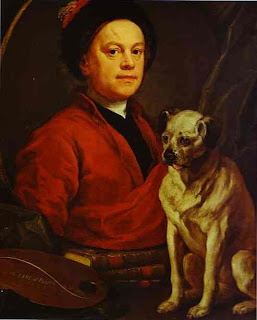 I just started reading Mary Schell Hoke Bacon's Pictures that Every Child Should Know. The chapter entitled "William Hogarth" immediately caught my eye. My school is named for William Hogarth. Actually it's named for my father. He died in a car accident a few months before my sisters and I opened the school, and we wanted to name it for him. He loved William Hogarth's work, and so we thought calling the school "Hogarth" would be a fitting tribute to him.

Anyway, I skipped right to the Hogarth chapter. Hogarth was, quite arguably, the first great English artist. He was an 18th century painter, printmaker, social satirist and editorial cartoonist. His brush strokes and etched lines told some of the greatest stories never written.

Bacon writes, "William Hogarth, like Watteau, originated his own school; in short there never was anybody like him. He was an editorial writer in charcoal and paint, or in other words he had a story to tell every time he made a picture, and there was an argument in it, a right and a wrong, and he presented his point of view by making pictures."

What does this genius artist have to do with Poetry Friday? I offer Hogarth's engraving The Distressed Poet. 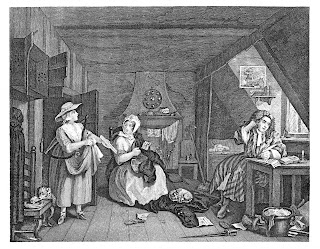 Who couldn't find poetry in this engraving? If that doesn't work for you, I offer Hogarth's epitaph, written by David Garrick.

"Farewell great Painter of Mankind
Who reach'd the noblest point of Art,
Whose pictur'd Morals charm the Mind
And through the Eye correct the Heart.
If Genius fire thee, Reader, stay,
If Nature touch thee, drop a Tear:
If neither move thee, turn away,
For Hogarth's honour'd dust lies here."
This week's Poetry Friday round-up is at Mommy's Favorite Children's Books.
Posted by Andrea Murphy at 12:15 AM

I'm trying to remember what was said about Hogarth in my Dickens class years ago... It seems like the professor made the point that Hogarth had a huge impact on the development of the novel, for the reason you give -- so much packed into each engraving. Amazing! Thanks for this.

I so enjoy poetic epitaphs.

I'm glad you enjoyed it, Janet and Kelly. I had fun writing it!