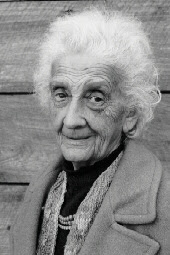 Johanna Jacobi was born in 1896 in Thorn, West Prussia (now a part of Poland). Her family called her Lotte (LOT uh). It was inevitable that she would one day make her living with a camera. Her great-grandfather, Samuel Jacobi, had studied with the famous L.J.M Daguerre in Paris. He returned to Thorn and set up his own studio. Her grandfather, Alexander, took over the studio and later passed it on to his own three sons including Lotte's father, Sigismund. Lotte and her sister, Ruth, were expected to follow in the family business.
When she was twelve, Lotte asked her father for a camera of her own. He did not give her one. Instead, he told her to make one. Lotte would learn the business, science, and art of photography from its very basic requirements. She designed a pin hole camera. As she worked with the little box, Lotte said she learned "that this camera was a sort of cage for light that controlled its effect." Lotte would try controlling the effects of light for the rest of her life. As a young adult, Lotte studied photography in Munich, Germany. She began to make a name for herself as a portrait photographer. The most famous names in European arts, theater, and politics sat for Lotte.
Lotte married briefly at 20. The marriage produced her only child, a son, John.
Portraiture was not her only talent. Lotte longed to travel and photograph great scenes away from her familiar surroundings. In 1932, she went to Russia for an extended stay. During the months that she was away, Adolf Hitler came to power in Germany. The persecution of Jews began in earnest and Lotte returned to a divided Germany . Jews were forced to wear Stars of David on their clothing and live in segregated ghettos. Jews who owned businesses found it harder and harder to make a living.
Portraits Done by Lotte 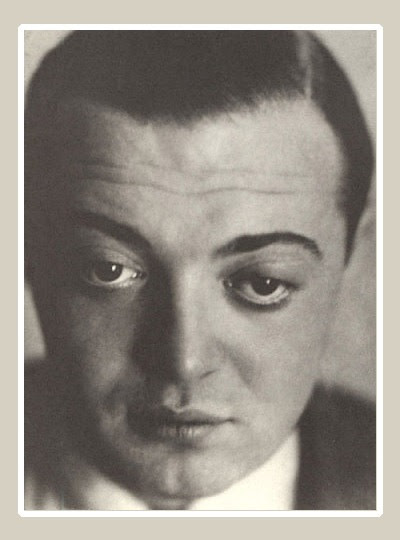 When Lotte's father died two years later, she felt it was time to leave Germany. She and her mother and young son left for New York City. Lotte's sister, Ruth, was already there. Leaving for the United States must have been one of the most difficult things Lotte ever did in her life. In those days, photos were made on huge glass plates. Lotte owned thousands of these plates that held the portraits of many well-known people and the scenes she had taken in Russia and elsewhere. It would be impossible to take them all. Lotte picked only some to take with her. The rest were lost forever, most likely destroyed by the Nazis.

In New York, Lotte opened a studio with Ruth. In 1940, she married her second husband: 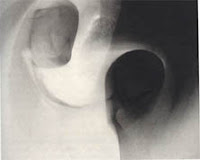 publisher Erich Reiss. The couple were together for 11 years before Reiss died in 1951. It was towards the end of Reiss's life, while he was ill, that Lotte discovered a new way to control light. Feeling that Reiss needed a distraction from his illness, Lotte asked a friend, Leo Katz, to give them lessons on the basis of photography. The students did not use cameras. It was during this time that Lotte developed pictures she called "photogenics" meaning "light generated." Lotte used a flashlight on photo paper "...as you would draw," she later wrote, "with a brush."
One of Lotte's Photogenics

She wasn't sure if the modern-looking designs could be considered art but her husband urged her to continue experimenting. Soon she was mixing regular photography with photogenic backgrounds.
Four years after her husband's death Lotte followed her son and his wife to New Hampshire. She lived in her own home near their property. She opened a new studio and often held shows featuring local photographers. New Hampshire politics fascinated her, too. She soon became involved and in 1976, at the Democratic National Convention, was the oldest person there to hold a press pass. She was 80 years old.

Lotte died in 1990 at the age of 94. As we continue to explore our Women of... you'll notice that many of our stories end this way. These strong women, whose achievements were often accomplished in spite struggles, difficult decisions, heartbreak, or other challenges, lived long lives. They blessed us and future generations by being fabulous role models.
Posted by Mur at 1:00 AM

"They blessed us and future generations by being fabulous role models."

Here's wishing a Happy New Year to the Write Sisters and all their readers!