I have always loved villains. To me, they are generally far more interesting than heroes, who tend to be rather predicable characters. Villains are more complex, they have waaay more psychological issues, and their deviousness tramples the plodding perseverance of most heroes. A good villain can make a bad book readable, and a good book even better.

When my kids were younger, one of my daughters was reading the Redwall series, so I started reading it, too. Redwall wasn’t for me. There were too many big blocks of description telling me what everyone was eating. I just didn’t care. And then I met Cluny the Scourge. 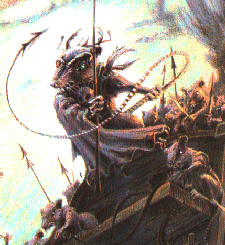 If you haven’t read Redwall, Cluny was a one-eyed rat who wore a batwing cloak fastened with a mole skull. In battle, he tipped his tail with a poisoned spike. He was so good at being bad - “Don’t be afraid. I won’t kill you. I don’t need you dead right now.” I’d flip ahead just to see how many pages I had to go before I could read about him again, then I’d skim, just to get the gist of the story, until I got to Cluny. He’s one of my favorite villains.

Villainy is also one of the few places where women have not had to fight for acceptance. Some of the best villains in literature are woman. Enter Mrs. Coulter from Pullman’s, His Dark Materials. Let a man cut the souls from little children and it’s a dark and horrible thing. But let a woman do it and it becomes an abomination. Alas! She changed her ways by the end of the trilogy, but at her worst, she was far more threatening than Lord Voldemort, whose evil and vileness was more talk than action. Thank goodness he had a band of henchmen!

Even at Disney, where everything is cotton candy sweet, they know the power of a good villain. There’s Maleficent in Sleeping Beauty -- “Now you shall deal with me, oh prince, and all the demons of hell!” (And isn’t that a great name for a villain?) The evil queen in Snow White -- “I’ll crush your bones!” And let’s not forget Cruella DeVil and her dog fur coats.

Yes, the literary world would be a duller place without villains. Without the bad guys, there would be no one to pummel, to outwit, or save the world from. Without villains, there would be nothing for a hero to do. And we, as readers, would live in a literary limbo of boring books no one would read. Libraries would shut down, book chains and publishing companies would go under, thousands of people would lose their jobs, and children would starve. Riots would break out in the streets until . . .

Somewhere, a villain arises. Using his silver-tongued speech, he rallies the people into revolution and uses them to take over the world, murdering everyone who stands in his way. But not everyone falls under the spell of his evil eloquence. From the ashes comes a hero who says enough is enough. A great battle ensues and the villain is vanquished.
And then . . . a writer emerges - a writer who tells the epic tale. People come from miles around to buy the writer’s story. Suddenly, publishers begin to re-invent themselves and pander to the writer, begging for the rights, but only one lucky publisher gets the story. The others find their own writers to whip up rip-off versions of the original. In only weeks, publishing houses grow and expand. Book stores and libraries reopen. Thousands of new jobs are created and children’s bellies are full once more. The world has become a better place. All because of a villain.

Email ThisBlogThis!Share to TwitterShare to FacebookShare to Pinterest
Labels: villains

I don't think I've ever done a villain before! The closest I've come is a hurricane! (1938) Do you think the ability to write villainy is something you're born with?

"He is the Devil. You've never seen anyone like Keyser Soze in all your miserable life, you idiot. Keyser Soze. Do you at least understand that? Keyser Soze. The Devil himself. Or are you American policemen so stupid that you haven't even heard of him? Keyser Soze, you ridiculous man. KEYSER SOZE."

I think it's a temperament thing, Diane. When people tick you off, do you ever imagine hanging them by their thumbs from the ceiling fan? If so, you have what it takes.

And Janet, I'll be looking for Keyser Soze. It's even fun to say. Keyser Soze!

It's a GREAT movie!