'Tis the season for Christmas books, so I'm going to tell you about two that NH's own Trina Schart Hyman had a hand in. 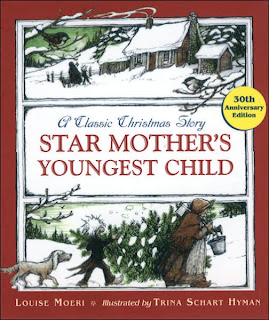 The first is not only my favorite Christmas book, it is also my all-time favorite book in the whole world! It's called Star Mother's Youngest Child (Houghton Mifflin, 1975) and was written by Louise Moeri and illustrated by Hyman.

A crotchedy old woman is surprised to find an extremely ugly child on her doorstep. The child is a star given form who has been allowed to visit the earth to discover Christmas. The old woman is someone who has spent many years alone and no longer has Christmas in her life. These two experience a Christmas together.

The utter simplicity of the book is to be admired, and the terse concluding lines always leave me verklempt. The small physical size of the book makes it perfect for sharing with just one or two. (Give this as a gift to yourself--you're worth it! It's still available in both hardcover and paperback.)

The second book is the even older, How Six Found Christmas (Little Brown, 1969, o.p.), which was both written and illustrated by Trina Schart Hyman. This, too, is a story about the heart of Christmas.

Once upon a time there was a little girl who had never heard of Christmas and therefore did not know what it was. By chance one day she happened to meet an old wise woman who told her that there was such a thing. But the wise woman did not elaborate on the matter, so the little girl was left as ignorant as before, yet with a great curiosity.

This little book would be a great conversation starter in a classroom. It also lends itself to reader's theater. Look for it at your local public library!

Hyman ends the unusual little fable with this, "Christmas is not only where you find it; it's what you make of it." To which I say, AMEN!
Posted by Diane at 1:58 PM