The MacDowell Colony is an artists’ retreat nestled in the woodlands of Peterborough, New Hampshire. It’s a place where all kinds of artists can get away to work on their crafts without the disturbances of everyday life. It opened its doors in 1907, and has been growing ever since. It exists because Marian MacDowell loved her husband.
In today’s world, a woman who lives her life for the benefit of her husband is a rare thing. I’m talking about emotionally secure women who do it willingly, who are not beaten or threatened into submission. Nancy Reagan is the only woman I can think of, and she isn’t really of this time. In fact, she’s closer to Marian MacDowell’s world than today’s.

Marian was born in 1857, a time when a woman’s sole purpose was to care for her home and family. As the eldest daughter of five children (she had two older brothers and two younger sisters) Marian fell into the role of caretaker early. Her mother died when she was eight and it was left to her to break the news to her father who was away at the time. When he returned, eight year old Marian not only told him the awful news, but comforted him when he should have been comforting her. Then, as the oldest daughter, she began to care for her family.

Luckily, Marian had an aunt - an aunt who was a 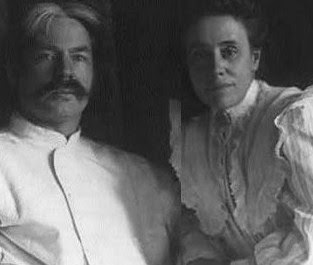 piano teacher. Without her, who knows what would have become of Marian. She gave Marian lessons, and as it turned out, Marian had talent. She traveled to Germany to study under the great Clara Schumann. Clara, however, was on tour when Marian arrived, and Marian got stuck with Edward MacDowell.

Marian was disappointed. She could have trained under an American at home, and Edward was just as reluctant to have her. He didn’t believe she had much talent. But a mutual friend pushed them together. They fell in love and married.

“I hadn’t been married three months,” Marian said, “before I knew that I had to make a choice between a husband and a career.”

I don’t believe Marian made the choice because it was her ‘duty’ or what was expected of her. From all I’ve learned about her, she did it out of love. She gave up her career, as well as having children, and insisted they live off her inheritance for at least five years, so Edward could concentrate on his music. Edward became one of the most popular composers of his time. Marian was his doting wife, and was happy to be so.

Edward was aware of the gift his wife had given him, and he talked often of how wonderful it would be if other artists had the opportunity he’d had -- to work undisturbed at their craft without interruption from life’s daily grind. He and Marian talked about starting an artists’ colony and set about tapping all their wealthy friends for donations. In 1907, the MacDowell Colony opened its doors.

Edward, however, soon became ill, and Marian spent all her time caring for him. By 1908, Edward had died, and the money for the colony had withered away. Marian could have given up on the colony and restarted her career. She could have remarried, or lived comfortably as the widow of Edward MacDowell. But Marian knew how important that colony was to her husband, and because she loved him, she did everything in her power to make his dream come true.

Marian began to tour the country, giving lectures and playing her husband’s compositions in an effort to raise money for the colony. Her ‘tours’ were not like concert tours today. Marian spoke in front of small groups of women in people’s homes and played in their living rooms and at sorority houses. Contributions were small, and in order to raise the large sums needed for the colony, she toured all year round. Eventually, she played at larger venues, but doing it day after day, and year after year, had to have been exhausting.

The colony became her life, or to be more accurate, fulfilling her husband’s dream of the colony became her life. If Edward had wanted a statue of himself erected, I’m sure that’s what Marian would have raised funds for. She worked long and hard at accomplishing Edward’s goal, seeing the colony through two world wars--taking in soldiers and refugees, the Great Depression, and the hurricane of 1938. Her single log cabin on 75 acres of woodland turned into 32 studios on 450 acres, along with free room and board, three meals a day, and in some cases, even a stipend to make up for lost wages. Over 5500 artists, such as Alice Walker, Leonard Bernstein, and Jules Feiffer, have spent time there.

Marian wasn’t a daredevil. She wasn’t a rebel or a revolutionary. She wasn’t even a rule breaker. But because of her, thousands of artists have benefited -- as well as the world at large and generations to come. We have all been gifted with the books and music and art and films that came about because of an ordinary woman who loved her husband.

Great post, Barb. I think it may have been Edward's goal to start with, but it really became hers. It was a different time . . .

Wow, you've come across that villain, the Hurricane of 1938, too!

"He didn’t believe she had much talent. But a mutual friend pushed them together. They fell in love and married."

That's the story I'd like to hear. Sounds like a 1930s screwball comedy (or one starring Hugh Grant and Julia Roberts)!