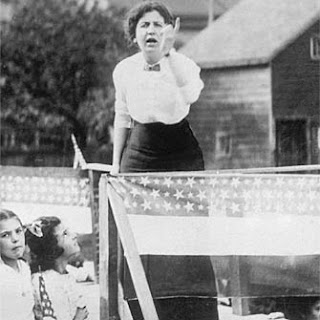 It's funny how some people can fade from memory simply because the cause they supported was not "P.C." Take for instance, a woman I profiled for Women of Granite: 25 New Hampshire Women You Should Know--Elizabeth Gurley Flynn.

Flynn became a member of the Communist Party in 1936, and in 1961 served as its U.S. chairperson. Whoa! That was a big "no, no" during that era. The "red menace" of communism was supposedly a major threat to the US, so of course, any American who supported it was to be rounded up and thrown into jail. Flynn was put on trial in 1951 and sentenced to prison where she served 2+ years starting in 1955. A Time magazine obituary told of Flynn's release,

By then, Elizabeth was no longer a slim and fiery girl but a plump and matronly woman. Freed in 1957, she said, "I had no reason to reform, repent or recant, so I just reduced."


What a great line! What spunk! Actually, Flynn reportedly spent most of her time while incarcerated in the prison library. My kind of woman!

Elizabeth Gurley Flynn was born in NH in 1890, but only lived in the state during the first decade of her life. As everyone knows, the first few years of one's life are the most important for shaping character, so it is easy to see what an effect NH had on her. She wrote in her autobiography, The Rebel Girl, of her family's move from Concord, NH to the mill town of Manchester,

The change from the pleasant clean little city of Concord, to the drab bleak textile center of Manchester, was sufficient to impress even a five-year-old child. We lived there nearly three years. The gray mills in Manchester stretched like prisons along the banks of the Merrimac River; 50 per cent of the workers were women and they earned one dollar a day...Our neighbors, men and women, rushed to the mills before the sun rose on cold winter days and returned after dark. They were poorly dressed and poverty stricken.

Is it any wonder that Flynn became a labor organizer who fought for the rights of workers? Her long life was filled with good, if often misunderstood, deeds in support of justice for all Americans.

It was difficult to put her life into less than the 600 words required for the profile in Women of Granite. I think this woman should be resurrected from the ashes of American history and given a second chance! Maybe some day I'll do just that.

My Irish-immigrant great-grandfather died from what they called "heat exhaustion" after a day at work in a Lawrence, Massachusetts mill. How many other people died or were chronically ill as a direct result of their time in the mills? I'm so glad WOMEN OF GRANITE is giving Flynn's life's work a bit of recognition.

I love that we are able to add details we had to eliminate in the books to our Wednesday Women blogs! What a great line about reducing. :)